Mamertine Prison – Carcer Tullianum
Hotel Columbia is conveniently situated in the heart of the historic centre of Rome, between the Opera House and the last bastion of the Diocletian Baths. It is within walking distance to Termini, the main railway station where taxis, buses and the subway can be taken to all places of interest. From Hotel Columbia every major monument and tourist attraction is easily reached by a short walk.
Carcere Mamertino, Carcer Tullianum, Mamertine Prison, Siti archeologici Roma, Roma Repubblicana, Archaeological site, Roma, Rome, Hotel Columbia neighborhood
18611
post-template-default,single,single-post,postid-18611,single-format-standard,bridge-core-2.8.9,qode-page-transition-enabled,ajax_fade,page_not_loaded,,vertical_menu_enabled,qode-title-hidden,side_area_uncovered_from_content,qode-theme-ver-27.3,qode-theme-bridge,disabled_footer_bottom,qode_header_in_grid,wpb-js-composer js-comp-ver-6.7.0,vc_responsive,elementor-default,elementor-kit-19532,en

Posted at 08:00h in All Year Round, Ancient Rome, Blog, Neighborhood by patrizia
Share

The Mamertine Prison, in antiquity the Tullianum, is one of the most important and fascinating monuments of the Roman Republic at the time. It holds a great historical and archaeological wealth for over 3,000 years. The first signs of the place date back to the ninth century BC

It is located below the Church of St. Joseph ‘‘the Carpenter’’ – dated sixteenth century – it faces at the Roman Forum, one of the most impressive views of the city. The complex consists of two distinct parts: the Carcer, the upper level, which dates from the seventh century. B.C. and Tullianum, the lower level, which dates back to the sixth century.a.C. The Tullianum waters were left to die the enemies of the Roman people, including some major historical figures, like Vercingetorix, the prince and leader of Gallia (Gaul).

On the Tullianum, an ancient tradition tells of the miraculous action of St. Peter, the first of the apostles of Jesus, which with a stick struck the rock and made water spring which used to baptize inmates and jailers; At the centuries this monumental complex was, therefore, also a place of great devotion, even today much visited by those who went on a pilgrimage to Rome.

The visit to this exceptional archaeological site is enhanced by a multimedia course that includes the viewing of videos and the use of tablet: you can see the reconstruction of the original environment and read insights on what was found during the recent excavations

The Carcer Tullianum is managed by Opera Romana Pellegrinaggi.

Imprisonment was not a sentence under Roman statutory law, though detention is mentioned in the Twelve Tables and throughout the Digest. “Detention,” however, includes debt bondage in the early Republic; the wearing of chains (vincula publica), mainly for slaves; and during the Imperial era a sentence of hard labor, as at the mills, mines or quarries. Slaves or lower-status citizens sentenced to hard labor were held in prison camps.

Incarceration (publica custodia) in facilities such as the Tullianum was intended to be a temporary measure prior to trial or execution; abuses of this principle occurred but were officially censured.

Located near the law courts, the Tullianum was used as a jail or holding cell for short periods before executions and as a site for executions.

In 63 BC, certain co-conspirators of Catiline, including Publius Cornelius Lentulus Sura, were held briefly in the Tullianum and executed there for their alleged plot to overthrow the government.

In this case, the executions were conducted hastily, without due process of appeal, during the consulship of Cicero, who was later exiled for his actions. Sejanus was held in the Tullianum before his baroque execution, which involved the Gemonian stairs, and the conflicting accounts of the end of Pleminius include a timely death in jail during trial. Some Gracchan sympathizers ended up in the Carcer, where the unfortunate haruspex Herennius Siculus hit his head on an architrave and died before he could be executed.

There is no evidence that the Tullianum was used for long-term incarceration, and the lowest dungeon was unsuited for the purpose; the level above, however, in theory might have been. In general, long-term incarceration was more widely practiced in the later Empire, and from the 4th century, under Christian rule, Roman laws and occasional personal intervention on the part of an emperor indicate a growing need to crack down on abuses such as filthy conditions and torture.

In some cases, it is unclear whether a source using the word carcer means “the” Carcer, or imprisonment in some other facility.

High-status prisoners, whether Roman or foreign, were typically held in the custody of individual Romans, sometimes at their homes or country estates.

The line between being a war captive and a hostage lawfully held by treaty was thin, and conditions of captivity could vary widely, from abject misery and humiliation to relative luxury.

As a prisoner of war, Perseus of Macedon was placed in a foul, overcrowded dungeon at Alba Fucens; the son of Tigranes was kept at a praetor’s house in Rome, where he could be trotted out as a dinner-party guest.

The Tullianum only rarely played a role in these detentions.

Captured foreign rulers or generals were paraded in a Roman conqueror’s triumph, and on a few occasions the “most prominent, famous, or dastardly” were executed afterward at the Tullianum.

These were “strikingly few” in number, and included the Samnite Gaius Pontius, the Gaul Vercingetorix, some “Cilician” pirates, and the Galatian Adiatorix. Jugurtha, king of Numidia, may have been executed at the conclusion of Marius’s triumph, or he may have died in prison several days afterward.

Most high-status war captives were neither executed nor held for any substantial length of time in the Tullianum. 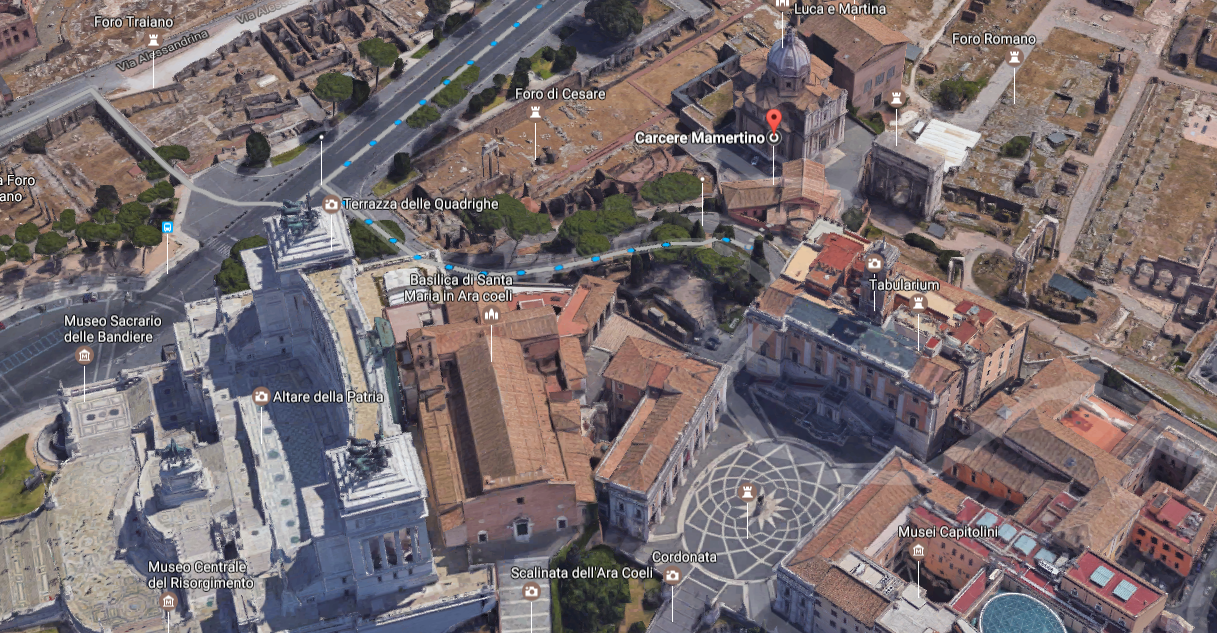